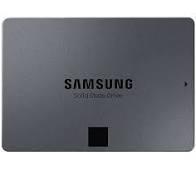 870 QVO is Samsung’s 2nd generation high-density 4-bit MLC based SSD with the new MKX controller, comes in capacities up to 8TB, making it the world’s largest client SSD*. The predecessor 860 QVO contributed greatly to the growth of terabyte capacity sales in the SATA SSD market. Also, despite the concerns regarding 4-bit MLC SSD’s performance and quality, 860 QVO has received overwhelmingly positive feedback from customers and tech media. 870 QVO gives enhanced optimized performance and proven reliability, which makes it an ideal solution for general users who require terabyte capacity SSDs with improved everyday computing experiences.

The 870 QVO provides best in class performance as sequential read (up to 560 MB/s) and write (up to 530 MB/s) approaches the limits of performance available with the SATA interface. These improvements are accompanied by enhanced random performance, bringing up to 13% higher speeds than 860 QVO in low queue depth workloads (QD1) which makes it an ideal solution for everyday computing experiences.

With enhanced 9x layer V-NAND characteristics and a refined new controller with an advanced ECC algorithm, the 870 QVO promises to deliver worry-free endurance up to 2,880TB of Total Bytes Written* along with a 3year limited warranty. The sustained performance has been enhanced up to 30% higher than the predecessor 860 QVO, allowing 870 QVO to reliably provide better performance continuously for a longer time. Also, the endurance of Intelligent TurboWrite has been enhanced to last up to 3.8 times longer.

The 870 QVO is the world’s largest client SSD to boast 8TB capacity, which surpasses even the largest capacity HDDs with 2.5” form factors. The fine-tuned MKX controller and enhanced V-NAND technology made it possible to build an 8TB SSD in a 2.5” 7mmT form factor.

Samsung Magician and Data Migration software* supports the 870 QVO. These software programs provide consumers with powerful and convenient features with simple to use in managing their Samsung SSDs. The Samsung Magician software offers a personalized experience which varies based on the Samsung SSD in use, with different functions available for different SSDs. Samsung Data Migration software is renewed with a unified design with Magician, giving a very convenient upgrade experience to Samsung SSD users. It provides a very powerful “Custom Cloning” feature that enables migration work even when source data is greater than the SSD’s capacity.