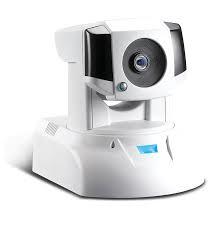 Compro IP550 series Day/Night network cameras will give you one less thing to worry about when you are on vacation - your home security. The camera's 2-megapixel resolution lets you monitor your home in razor-sharp detail. A 340-degree pan and 100-degree tilt mechanical design coupled with advanced IR technology lets you monitor and follow people or objects in your home or office at all hours of the day and night.FeaturesWide Coverage with 2 Megapixel ResolutionThe 2 megapixel/HD resolution the camera offers lets you view details and identify people and objects at least four times better than on a conventional CCTV camera. The maximum 1600 by 1200 resolution allows you to capture video from a wide area, and effectively reduces the number of cameras required in a surveillance network.Day & Night Functionality with Built-in IR LEDsThe camera is equipped with 12 IR LEDs and an ambient light sensor that detects environmental lighting conditions. When low-light conditions are detected, the built-in IR LEDs are automatically switched on to provide additional infrared light that helps deliver clear night-time image.Mechanical IR-Cut FilterA built-in mechanical IR-cut filter placed in front of the camera's image sensor can filter out infrared light in the daytime, producing better color reproduction. At nighttime or when the camera's light sensor detects low-light conditions, IR-cut filter can be automatically removed to allow infrared light to reach the image sensor, thus achieving better low-light sensitivity.Motorized Pan / TiltThe camera is able to provide flexible viewing angle thanks to its advanced 340-degree pan and 100-degree tilt mechanical design. And its maximum panning speed of 90 degrees per second is on par with that of a professional-grade PTZ camera on the market.ONVIF SupportONVIF support makes the camera interoperable with all sorts of ONVIF-conformant IP security products, such as an ONVIF-conformant recording system. ONVIF support also means users can use equipment from different manufacturers to build a surveillance system that best meets their needs and preferences.Plug-n-Play FunctionalityUnlike other network cameras, installing this Compro camera does not require any networking expertise. Nor is any sort of router configuration required - simply plug in the cables, install the camera software, and then your Compro camera is ready to be viewed and shared on the Internet.microSDHC Card SlotThe built-in microSDHC card slot allows the storage of event snapshots and event recordings to the memory card. The stored data can be accessed from a remote viewing PC. The camera also can automatically take snapshots or record video when it detects unusual events in the monitored area.Two-way Audio CommunicationThe camera is capable of providing full-duplex and bi-directional audio communication through a built-in microphone and audio in/out port. The audio communication feature allows you to eavesdrop on the monitored area or broadcast your voice to intruders.Support for Alarms and SensorsThrough an optional digital I/O expansion box, the camera offers 3 sensor input ports and 3 alarm output ports. With them, the camera can initiate video recording, take snapshots, etc., when sensors are triggered. Or when events are detected, activate alarms or take other response actions.Video Motion Detection and Audio DetectionProvided with three individually configurable motion detection zones, the camera can record video or trigger alarms or alerts when motion is detected in user-specified areas of the camera image. Also, the camera's built-in microphone enables it to hear what the video cannot see and to trigger the audio detection alarm when sounds like screams, glass breaking, etc., are detected.Friendly Wall Mount DesignThis PTZ camera comes with a wall mount plate friendly designed to allow for the fast and easy mounting and dismounting of the camera. Once secured on the wall or ceiling, the camera can then be easily configured via the setup wizard or remote viewer to rotate its image by 180°.